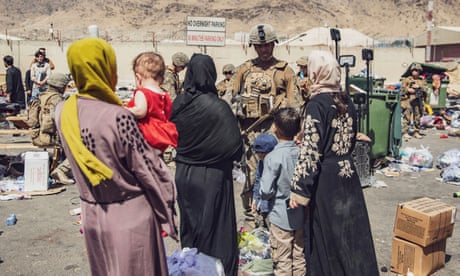 Former officials and lecturers at Afghanistan universities have called on the Taliban to maintain and upgrade the country’s education system instead of creating a new one, AP reports.

Let’s not reject everything, starting a new system, we should work more on what we already have.

TOLO News Journalist Ziar Khan Yaad has quoted the Taliban’s caretaker higher education minister saying: “Girls and boys will no longer be able to study together in universities and will continue to study in separate classes in accordance with Islamic law.”

“[The] World tried to take religion out of scientific education which harmed the people,” Haqqani said.

New York Times reporter Sharif Hassan says the Taliban haven’t yet met Hazara leaders to engage them in talks about the formation of the future government.

The Taliban said on Saturday they were preparing a new cabinet as the U.S. evacuation nears its end.

The Hazaras are a Hazaragi and Dari-speaking ethnic group that primarily reside in central Afghanistan. They are a significant minority group in the country with a population ~8 million people.

The Hazaras, along with other predominantly Shia ethnic groups, have been fearful of persecution in the wake of the Taliban taking power.

The US remains on high alert for another possible terror attack at Kabul airport and has warned citizens to leave the area immediately.

The US embassy in Kabul on Sunday issued an alert – its second in as many days – of security threats at specific areas of the airport, including access gates, following an earlier warning from president Joe Biden that another terror attack in Kabul was “highly likely”.

Here are today’s other key developments:

The UK prime minister Boris Johnson has published a letter to “all those who served in Afghanistan.”

“Over the last two decades, many thousands of you gave your lives to services in Afghanistan, often in the most arduous conditions. I realise this will be an especially difficult time for the friends and loved ones of the 457 British services members who laid down their lives.”

The Russian Ambassador to Kabul, Dmitry Zhirnov has said that the Taliban could take over the Panjshir province within hours.

Panjshir province in the north-east of the country has emerged as a centre of resistance to Taliban rule in recent weeks. Along with Baghlan, Panjshir is one of two provinces reportedly not controlled by the Taliban.

“I think they could take over Panjshir in a day, maybe even in a few hours, but they don’t do it to avoid bloodshed,” Zhirnov said on a YouTube Live show.

The diplomat added that the situation in the only Afghan province that had not fallen to the Taliban was relatively calm.

Zhirnov also said that the Islamic State suicide bombing at Hamid Karzai international airport in Kabul represented a challenge to the Taliban and not the United States. He added that there was a fierce confrontation between the two extremist groups, Islamic State Khorasan Province (ISKP) and the Taliban.

ISKP was founded just under six years ago after representatives of IS made their way to south-western Pakistan to meet disaffected Taliban commanders and other extremists who felt marginalised within the jihadist movement in the region.

Earlier, AP reported that the crowd waiting outside Kabul airport’s gates has thinned out following the warning of a “specific, credible” threat issued by the US embassy in the early hours of Sunday morning.

President Biden warned on Saturday that another terrorist attack in Kabul was highly likely in the next 24 to 36 hours, and said the US drone strike that killed two Islamic State targets in retaliation for the deaths of 13 US service members and as many as 170 civilians on Thursday would not be the last such action.

To recap the big UK news:

Labour has accused government ministers of being “missing in action” during the Afghanistan crisis as the blame game over the handling of the withdrawal after a 20-year campaign in the country began.

The Sunday Times claims that up to 9,000 people who may have been eligible to escape – such as women, journalists, and aid workers – were left behind.

Defence secretary Ben Wallace previously said he believed there were between 800 and 1,100 Afghans eligible under the Afghan Relocation and Assistance Policy (Arap) scheme who would be left behind, while about 100 and 150 UK nationals would remain in Afghanistan, although Wallace said some of those were staying willingly.

Guardian foreign correspondent Jason Burke has written on the parallel between US president Biden’s pledge to exact revenge for the Islamic State suicide bombing in Kabul last week and the words of President George W Bush in the wake of 9/11.

Biden pledged an end to “America’s longest war” in April. Outlining his intention to end the US military presence in Afghanistan prior the the 20th anniversary of the 9/11 attacks.

The decision has received criticism in diplomatic and military circles in the wake of the Taliban seizing power.

You can read Jason Burke’s full piece below:

A former head of the British Army said the UK government was “asleep on watch” in relation to the protection of Afghans who helped soldiers and officials.

“This issue has been on politicians’ desks for two to three years and, certainly, it’s been there during the course of this year.”

Labour shadow foreign secretary Lisa Nandy said the “key priority” of the UK government should now be to “make sure we get humanitarian assistance in to the people of Afghanistan”.

She told Sky News: “Right now, the UK needs to get its act together and get its plans in place to save the lives of those who supported us.”

The move comes as the Taliban court international recognition after seizing power in Afghanistan.

This has caused raw opium prices to soar across the country.