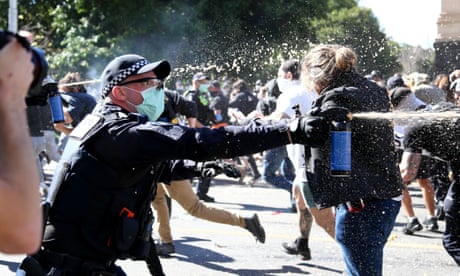 Anti-lockdown protesters clashed violently with police as thousands of unmasked people marched through the streets of Melbourne on Saturday.

Victoria police said they had made 218 arrests and that six officers were hospitalised during a series of altercations. Police said in a statement the majority of the estimated 4,000 demonstrators “came with violence in mind”.

“The behaviour seen by police was so hostile and aggressive that they were left with no choice but to use all tactics available to them,” the statement said.

The Melbourne protests took place after Victoria’s premier, Daniel Andrews, announced a lockdown in place across Melbourne would be extended across the entire state. The state recorded 77 new cases of coronavirus on Saturday.

More than 700 extra Victorian police officers were deployed to contain the lockdown protest.

Police said they had, for the first time during a lockdown protest, used non-lethal tactics that included rounds of pepper spray projectiles and canisters.

Two police officers suffered broken noses. One officer was hospitalised with a broken thumb and others suffered concussion.

Each of the 218 protesters arrested would be fined $5,452 for breaching public health orders. Police also issued an additional 236 fines and said three people were expected to face charges for assaulting police.

“Further investigations will be conducted into offences committed during the protest including the assault of numerous police officers and the use of flares.”

Social media videos showed hundreds were in attendance with some letting off flares.

People of all ages were seen walking through the streets, shouting for “freedom” while police condemned the marchers as selfish.

Public gatherings were not allowed in Victoria as the state tried to contain a surge in coronavirus cases.

Police on horseback lined up to block the march, which appeared to start in Russell Street and join other groups.

Police blocked and herded protesters, with some officers using pepper spray to keep crowds back. Few people appeared to be wearing masks.

A crowd estimated in the thousands gathered in Brisbane City Botanic Gardens to rally against the lockdown and vaccine measures. Queensland police said no arrests had been made

In Sydney, police deployed more than 1,500 extra officers and issued orders banning taxis and Ubers from taking passengers into the CBD until 3pm on Saturday. Trains were not allowed to stop at city centre stations. Police also issued 137 tickets after stopping around 38,000 cars approaching Sydney.

New South Wales police said they made 47 arrests and issued at least 261 penalty infringement notices across the Sydney CBD and regional NSW.

The state’s police minister, David Elliott, said he was disappointed some people ignored warnings to stay at home.

“That small minority has again chosen to blatantly ignore the very clear, repeated warnings of NSW police, which is disappointing, frustrating and – frankly – disgraceful,” he said.

“The actions they have taken are likely to prolong the very lockdown they were protesting about.”

South Australia police said no arrests were made at an anti-lockdown protest in Rundle Park in Adelaide.