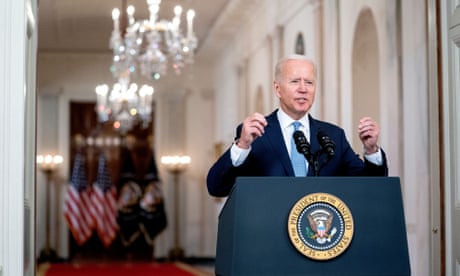 Joe Biden has said he takes responsibility for the bloody, often chaotic withdrawal from Afghanistan and said it should mark a new era in US foreign policy, relying less on military muscle.

Addressing the nation from the White House 24 hours after the last US soldier left Kabul, Biden sought to confront his critics about the handling of the withdrawal. He celebrated the evacuation of 124,000 civilians in the 17 days following the fall of the Afghan capital and said it was time to “turn the page” on the US role abroad, pointing to a less interventionist future.

Facing reporters in the state dining room, Biden looked into the camera and said he took responsibility for what he insisted was a “wise” decision. He admitted that his administration had not anticipated the speed of the Afghan army’s collapse, but also made clear there was plenty more blame to go around, singling out his predecessor and the former Afghan president Ashraf Ghani.

He pointed out he had inherited the Doha agreement from Donald Trump’s departing administration. That accord, signed with the Taliban a year earlier, did not make the promised US withdrawal on 1 May contingent on any political settlement inside Afghanistan, and it allowed the release of 5,000 Taliban prisoners. Biden said those released fighters “including some of the Taliban’s top war commanders, among those who just took control of Afghanistan”.

“By the time I came to office the Taliban was in its strongest military position since 2001, controlling or contesting nearly half of the country,” Biden said.

“So we’re left with a simple decision: either follow through on the commitment made by the last administration and leave Afghanistan, or say we weren’t leaving and commit tens of thousands more troops, going back to war.”

“I was not going to extend this forever war,” he said.

In that fundamental decision, Biden has solid support. A Pew Research Center poll published on Tuesday showed 54% of US adults agreeing that the decision to pull out was the right one. But there was limited enthusiasm for the way Biden went about it. Just over a quarter of those polled said the administration had done an excellent or good job while 42% said it had performed poorly.

Biden admitted that the assumption that the Afghan security forces would be able to hold out for some time following the US withdrawal “turned out not to be accurate”. But he suggested the biggest mistake was putting faith in Ghani, who abandoned Kabul and fled the country as the Taliban closed in.

He said that the Afghan people “watched their own government collapse and the president flee amid corruption and malfeasance, handing over the country to their enemy, the Taliban, and significantly increasing the risk to US personnel and our allies”.

Hours before Biden spoke, Reuters news agency published excerpts from the last telephone conversation between Biden and Ghani, on 23 July, in which it was clear that neither leader had any clue military disaster was so close at hand.

“You clearly have the best military,” Biden told Ghani, who is now believed to be in the United Arab Emirates. “You have 300,000 well-armed forces versus 70-80,000 and they’re clearly capable of fighting well.”

In the call, Biden pressed Ghani to address what he called the Afghan government’s “perception problem”.

“I need not tell you the perception around the world and in parts of Afghanistan, I believe, is that things are not going well in terms of the fight against the Taliban,” Biden said. “And there is a need, whether it is true or not, there is a need to project a different picture.”

Republican leaders in Congress focused their line of attack on Tuesday on the fact that a few hundred US nationals had not evacuated, claiming the Biden administration had left them “stranded”.

The president, whose tone was defensive for much of the half-hour speech, said that sticking to the deadline of 31 August and cutting off the evacuation was the “unanimous recommendation of my civilian and military advisers”.

“Their recommendation was that the safest way to secure the passage of remaining Americans and others out of the country was not to continue with 6,000 troops on the ground in harm’s way in Kabul but rather to get them out through non-military means,” he said.

Biden noted that over 5,500 American civilians had been evacuated.

“Now we believe that about 100 to 200 Americans remain in Afghanistan with some intention to leave,” he said. “Most of those who remain are dual citizens, longtime residents, who earlier decided to stay because of their family roots in Afghanistan.”

“For those remaining Americans, there is no deadline,” the president promised, saying US diplomacy would now focus on finding a way out for them.

Biden took particular issue with suggestions that a small US military contingent could have remained in Afghanistan propping up the Ghani government. He implied that such ideas come easily to those, the overwhelming majority, who do not have to bear the brunt of repeated deployments in America’s “forever wars”.

“I don’t think enough people understand how much we’ve asked of the 1% of this country who put that uniform on, willing to put their lives on the line in defence of our nation,” he said, in the most emotive passage of the speech, in which Biden invoked his son Beau, who had served in Iraq and died in 2015 of a brain tumour.

“A lot of our veterans and their families have gone through hell,” he said. “Deployment after deployment, years away from their families, missed birthdays, anniversaries, empty chairs at holidays, financial struggles, divorces, loss of limbs, traumatic brain injury, post-traumatic stress.”

He said 18 veterans took their own lives every day in America, although experts argue that it is unknown how many of those suicides can be attributable to military service. The veterans affairs department told the Daily Beast that calls to the veterans crisis helpline had risen significantly since Kabul’s fall.

“There’s nothing low grade, or low risk, or low cost about any war,” Biden said.

“We no longer had a clear purpose in an open-ended mission in Afghanistan. After 20 years of war in Afghanistan, I refused to send another generation of America’s sons and daughters to fight a war that should have ended long ago,” he said.

It was time to learn from the mistakes of Afghanistan, the president declared. He laid out the tenets of what is increasingly seen as a “Biden doctrine” in foreign policy.

“First, we must set missions with clear, achievable goals, not ones we will never reach. And second, we must stay clearly focused on the fundamental national security interest of the United States of America,” he said.

One of the biggest mistakes of the US war in Afghanistan, the president argued, was the relentless drift in objectives, from stopping al-Qaida from attacking the US to building a nation.

“Moving from that mindset, from those kinds of large-scale troop deployments, will make us stronger and more effective and safer at home,” he said.

Even as he talked about military retrenchment, however, Biden balanced it with threats against the Islamic State (IS), believed to have carried out last Thursday’s devastating bomb attack outside Kabul airport.

“We are not done with you yet,” he said. To those who wished America harm, Biden’s message was: “We will not forgive. We will not forget. We will hunt you down to the ends of the earth and you will pay the ultimate price.”

The relentless pursuit of vengeance through military means has led the US into “forever wars” in the past. Biden insisted that would not happen on his watch, but recent history suggests it is a hard habit to break.

Eleven years to the day before Biden’s speech, Barack Obama announced the end of the “combat mission” in Iraq. Four years after that, Obama ordered US forces back into country, to fight IS.