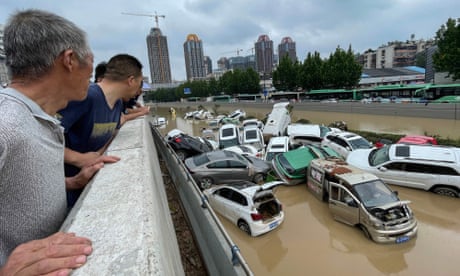 The official death toll from central China’s devastating floods has risen to 33, as the public began to ask questions about the readiness of authorities for the disaster.

Cleanup efforts were under way in Henan province and the capital city Zhengzhou on Thursday, after a record breaking rain storm flooded the city’s streets and subway, damaged dams and reservoirs, collapsed roads, cut power to at least one hospital and was linked to a massive explosion at a factory in Dengfeng city.

Authorities said 200,000 people were displaced by the floods and more than three million people were affected.

Heavy rain was forecast to continue this week, driven in part by a strengthening typhoon east of Taiwan. In Guangdong, in southern China, 13 construction workers were killed when they were trapped in a flooded tunnel. Thousands of rescuers were sent in to assist northern Henan, where dozens of counties were hit by flooding on Wednesday night and Thursday, with reports of overflowing reservoirs, submerged roads, and cars and trucks being washed away.

The Henan disaster has prompted public scrutiny over the preparedness of authorities, in particular the apparently inaccurate weather forecasts, and the decision to keep the subway operating throughout the deluge.

Meteorological bodies have referred to the rainstorm – which saw a year’s worth of rainfall in three days – as a one-in-1,000-year weather event. The rainfall broke hourly and daily records of the 70 years of collected data.

At least 12 of the deaths occurred on the subway, where about 1,000 people were reportedly trapped in stations and carriages after water filled the tunnels. Alarming footage showed people clinging to handrails in chest-high water.

Local authorities said the heavy rain caused water to accumulate in the parking lot near Line 5 of the metro, breaking through a retaining wall at around 6pm and flooding the line, stopping trains between Shakoulu – where at least five deaths are believed to have occurred – and Haitansi stations.

The Chinese government has ordered local authorities to make immediate improvements to urban flood controls and emergency responses, including hidden risks on the rail system.

“They must take emergency measures such as suspending trains, evacuating passengers, and closing stations in atypical situations such as excessively intense storms,” the ministry said in a statement viewed at least 190m times on Weibo.

Hawkish state-owned tabloid, the Global Times, said it was “absolutely impossible to keep Zhengzhou from flooding” in such heavy rains but greater mitigation efforts were needed to reduce the loss of life.

Concerns had been raised about the safety of the subway system – which opened its first line in 2013 – the decision to keep it operating at peak hour when the rain was at its heaviest, and the transparency of officials. Online, commenters were divided, but included substantial criticism of the response.

“Why didn’t you close the subway in advance when it was raining so heavily,” asked one.

“I only see loads from Mr and Ms Hindsight,” said another in response to the ministry’s statement. “We can’t control the flood, but they should have suspended the operation when numerous alerts were released.”

Zheng, a safety worker at Zhengzhou metro, told Southern Weekly on Wednesday they tried to keep the trains running so people could get home but were overwhelmed by the Tuesday afternoon downpour. “This is the first time in my life I have witnessed water flooding into the metro station. I felt hopeless,” he said.

The Henan Business Daily newspaper reported staff at one station told a man all passengers had been evacuated but had to acknowledge that wasn’t true after he started a video call with his wife who was still trapped on board a train. She told her husband the water had almost reached her neck and passengers were struggling to breathe, the report said.

A widely shared WeChat article noted early contradictory statements from local state media, including that no passengers were in danger, while at the same time footage – later blocked from China’s internet – was being shared of dead bodies at Shakoulu station, including by the national state media outlet, Xinhua.

The WeChat article also noted premature declarations that the rescue mission was complete, while trapped passengers continued to post about their predicament. The article – which also questioned whether it was a man-made disaster linked to the blasting of a dam late Tuesday near the city of Luoyang – was later censored for “violating regulations”, according to a Twitter user, Matt Knight, who collected online posts.

Knight noted multiple examples of the stark differences between some posts by state media and authorities, which emphasised rescue efforts and heartwarming community acts, and those shared by the public.

Public scrutiny has also fallen on the timing of warnings from the local meteorological services. The provincial weather bureau told state media it had issued a report warning of the coming torrential rains two days in advance.

The impact of the floods spread beyond the capital.

In the city of Luoyang, local authorities said the rainfall had caused a 20-metre breach in the Yihetan dam, which “could collapse at any time”. A division of China’s military were sent out to the site to carry out emergency blasting and flood diversion.

At least four were killed in Gongyi city, about 80km from Zhengzhou, where the rains caused flooding and landslides.

Some worry that given the scale of the damage, the post-disaster reconstruction will be particularly challenging for one of the most populous provinces in China. Zhengzhou alone is home to 12 million people.

Henan province – which is situated between Beijing and Shanghai in central China – has many cultural sites and is a major base for industry and agriculture. It is crisscrossed by multiple waterways, many of them linked to the Yellow River, which has a long history of bursting its banks during periods of intensive rainfall.

China routinely experiences flooding in the summer months, but rapid urbanisation, and conversion of farmland, as well as the worsening climate crisis has exacerbated the impact of such events.