G7 live: Raab suggests it was ‘offensive’ for Macron to imply Northern Ireland not full part of UK 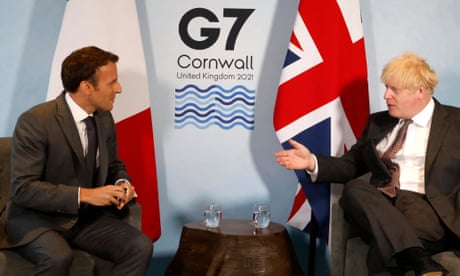 Boris Johnson did not join his fellow Catholic Joe Biden at mass this morning. (See 10.24am.) But, as the BBC reports, he did go for a swim at Carbis Bay.

Of course, whether Johnson really counts as a Catholic is a matter of debate. His recent marriage to Carrie took place in a Catholic cathedral, and he was baptised as a Catholic as a baby (although subsequently confirmed as an Anglican). On the basis of this, he has been described as Britain’s first Catholic prime minister. But Johnson is not a regular churchgoer and Downing Street refuses to discuss his religious affiliation. As ITV’s Robert Peston discusses in this blog, when he asked Johnson in an interview yesterday if he considered himself a practicing Catholic, Johnson refused to answer.

There was huge excitement at the church of the Sacred Heart and St Ia in St Ives when Joe and Jill Biden arrived for morning mass.

The president was 15 minutes late as his cavalcade negotiated the twisting streets of the harbourside town.

Parishioner Ann Buckleysaid: “It was an ordinary mass. He didn’t arrive on time. He missed father’s sermon. Father didn’t wait for him. He has another mass in Penzance to get to. It’s not every day you see the president of the US.”

Her brother, Martin, was disappointed that Boris Johnson hadn’t visited too: “Boris gets married Westminster Cathedral but doesn’t come here. What a golden opportunity and he didn’t come.”

This is from Bloomberg’s Jennifer Jacobs.

Boris Johnson and Cyril Ramaphosa, the South African president, agreed that there is “an urgent need to expand vaccine manufacturing capacity around the world and increase access”, No 10 said in its read-out of the meeting.

This morning Dominic Raab, the UK foreign secretary, said G7 leaders would meet the target set by Boris Johnson for G7 countries to commit to donating one billion doses of vaccine to poorer countries. (See 8.36am.) Raab said:

We now believe that we’ve got a commitment for a billion doses to go to vaccinating the world by the middle of next year.

The current trajectory had us on the end of 2024, and that is a game changer in dealing with the pandemic and getting the world back to normal.

As my colleague Patrick Wintour reports, aid campaigners want more clarity about what has actually been agreed.

There are two items on the formal G7 agenda for this morning.

In his Sky News interview Gordon Brown, the former Labour prime minister, said this G7 summit would be remembered as an “unforgivable moral failure” because its vaccine plan for the developing world was not ambitious enough. He explained:

When we needed 11 billion vaccines, we’ve only got offered a plan for one billion.

I think this summit will also go down as an unforgivable moral failure, when the richest countries are sitting around the table with the power to do something about it.

Now that we’ve discovered the vaccine, we have not delivered the comprehensive plan that will deliver vaccination by the middle of next year …

But then the problem will come back to haunt the richest countries because we will have contagion spreading that will hurt even the people who are vaccinated because of mutations and variants.

Brown has been a leading figure in a global campaign saying the G7 should commit to a $60bn two-year vaccine and healthcare support package for poor countries.

In interviews at the G7 on Friday and Saturday Boris Johnson repeatedly refused to rule out the UK acting unilaterally again to disapply parts of the Northern Ireland protocol, the agreement governing post-Brexit trade in Northern Ireland. Northern Ireland has different rules because, unlike the rest of the UK, it remained in the EU single market.

At the end of this month the “grace period” which meant chilled meats going from Great Britain to Northern Ireland were exempt from the restrictions is due to end. Northern Ireland supermarkets were supposed to use this period to source supplies from Ireland, but now the UK government is saying it is absurd that the EU wants to stop British sausages being sold in Northern Ireland and Johnson has not ruled out unilaterally extending the grace period.

Micheál Martin, the Irish taoiseach (PM), told Sky News in an interview broadcast this morning that it would be “very problematic” if the UK did this. He said:

I think it will be very problematic because it’s not about sausages per se, it really is about the fact that an agreement had been entered into, not too long ago, signed off by the British government with the European Union.

If there’s consistent, unilateral deviation from that agreement, that clearly undermines the broader relationship between the European Union and the United Kingdom, which is in nobody’s interest and therefore that’s why the UK with the EU have to work very hard now in the coming weeks.

But Martin also said that he thought there was a desire both on the EU side and on the UK side to find a resolution to this dispute.

Gordon Brown, the former Labour prime minister, has told Sky’s Trevor Phillips on Sunday that thousands of people will die because the G7 commitments on vaccines do not go far enough. These are from the Sun’s Kate Ferguson.

Q: Is it right that President Macron told the PM that Northern Ireland was not part of the UK?

Raab says he will not “spill the beans” on what was said at a private meeting yesterday.

But he effectively confirms the reports, saying it is not just one person. He says senior EU figures have been talking about Northern Ireland as if is different from the rest of the UK. He goes on:

“We have serially seen senior EU figures talk about Northern Ireland as if it was some kind of different country to the UK. That is not only offensive, it has real world effects in the communities in Northern Ireland, creates great concern, creates great consternation. But also, could you imagine if we talked about Catalonia, the Flemish part of Belgium, one of the lander in Germany, northern Italy, Corsica in France as different countries? We need a bit of respect here, and also, frankly, an appreciation of the situation for all communities in Northern Ireland.

At their bilateral yesterday, in a conversation about the Northern Ireland protocol, Boris Johnson reportedly told Emmanuel Macron: “How would you like it if the French courts stopped you moving Toulouse sausages to Paris?” Macron reportedly replied that was “not a good comparison because Paris and Toulouse are part of the same country”.

This has been reported as Macron saying Northern Ireland was not part of the UK, although, according to the Sunday Times, “a source in the French delegation said that Macron was well aware that Northern Ireland was part of the United Kingdom”. Macron was making the point that the UK, which comprises four nations, is not the same as a unitary state like France, the source told the Sunday Times.

Trevor Phillips is now interviewing Dominic Raab, the UK foreign secretary, from the G7 in summit on Sky News. Asked what the summit had achieved, Raab said there was now an agreement from G7 leaders to supply one billion doses of vaccine to poorer countries over the next year.

Good morning. It is the final day of the G7 summit at Carbis Bay in Cornwall and overnight Downing Street has put out a statement highlighting two new initiatives.

G7 leaders are expected to agree plans today (Sunday) to transform the financing of infrastructure projects in developing countries, part of a raft of measures at the Summit to address the climate crisis and protect nature.

The ‘Build Back Better for the World’ plan will bring together G7 countries under the UK’s presidency to develop an offer for high quality financing for vital infrastructure, from railways in Africa to wind farms in Asia.

The new approach is intended to give developing countries access to more, better and faster finance, while accelerating the global shift to renewable energy and sustainable technology. The Government will build on this with other countries ahead of the COP26 Summit in November.

This is another example of Boris Johnson aligning G7 goals with a Tory election slogan, but perhaps his fellow G7 leaders do not mind. This fund is being seen as an alternative to China’s Belt and Road initiative, its highly ambitious plan to use infrastructure finance to extend Chinese influence, especially in Asia and Africa, and “Build Back Better for the World” has strong US support.

The prime minister has also launched the UK’s Blue Planet Fund from the G7 Summit’s ocean-side setting in Cornwall. The £500m fund will support countries including Ghana, Indonesia and Pacific island states to tackle unsustainable fishing, protect and restore coastal ecosystems like mangroves and coral reefs, and reduce marine pollution.

No 10 also says the G7 will endorse a “nature compact” this afternoon “to halt and reverse biodiversity loss by 2030 – including supporting the global target to conserve or protect at least 30 percent of land and 30 percent of ocean globally by the end of the decade”.

To help make the case for the nature compact, the veteran broadcaster and environmentalist Sir David Attenborough will address the G7 today. In a comment released in advance, he said:

The natural world today is greatly diminished. That is undeniable. Our climate is warming fast. That is beyond doubt. Our societies and nations are unequal and that is sadly is plain to see

But the question science forces us to address specifically in 2021 is whether as a result of these intertwined facts we are on the verge of destabilising the entire planet?

If that is so, then the decisions we make this decade – in particular the decisions made by the most economically advanced nations – are the most important in human history.

This blog will be focusing just on the G7 today. The summit is due to wrap up at lunchtime, and at 2pm Boris Johnson is due to hold a press conference. Other leaders will be speaking to the media then too.

I try to monitor the comments below the line (BTL) but it is impossible to read them all. If you have a direct question, do include “Andrew” in it somewhere and I’m more likely to find it. I do try to answer questions, and if they are of general interest, I will post the question and reply above the line (ATL), although I can’t promise to do this for everyone.

If you want to attract my attention quickly, it is probably better to use Twitter. I’m on @AndrewSparrow.

Alternatively, you can email me at [email protected]