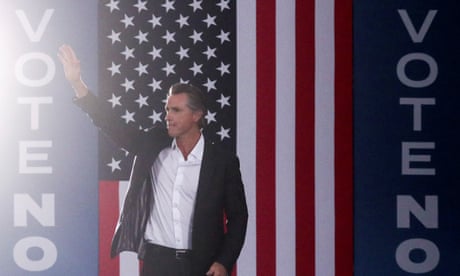 California’s governor, Gavin Newsom has prevailed in a historic recall election that had him battling for his political life. In a referendum on the governor’s leadership through the pandemic, voters resoundingly rejected the choice to replace him with a Trumpist Republican.

The Associated Press projected the results about 45 minutes after polls closed on Tuesday night. Newsom’s most popular challenger was Larry Elder, a right wing radio host who drew comparisons to the former president and who attempted to sow baseless doubts about the election process.

Newsom did not hold a watch party or election night celebration. Instead, he struck a somber tone speaking to reporters on Tuesday night, saying: “Tonight I’m humbled, grateful, but resolved.”

Speaking in Sacramento, Newsom said that in voting no on the Republican-led recall, Californians said “Yes to science, we said yes to vaccines.”

“I’m humbled and grateful to the millions and millions of Californians that exercise their fundamental right to vote,” Newsom said, “and express themselves so overwhelmingly by rejecting the division, by rejecting the cynicism.”

While margins are expected to shrink as more votes are tallied, results on Tuesday night showed Californians appeared to oppose the recall effort in greater numbers than some experts initially expected. With about 60% of ballots counted, “no” on the question of whether to recall Newsom was ahead by a two to one margin.

Although the race was called by the AP on Tuesday night, the vote count is not yet final, and election officials have 30 days to count all the ballots.

As a Democratic governor of a deep-blue state, the governor found himself in the peculiar position of having to defend his seat after the recall effort gained steam amid the worst of the pandemic, fueled by frustrations over school and business closures.

Gubernatorial recall petitions are very common in California, but only one other such recall has made it on to the ballot in state history.

Newsom initially dismissed the recall election as a costly distraction – indeed, it could cost the state some $300m or more. But Democrats kicked into high gear in the late summer as polls indicated that apathetic and angry voters could cost him his position at the helm of the most populous US state.

In the lead-up to the election, Newsom – who struggled to live down missteps and connect with young progressive voters – reframed the recall as a referendum on Trumpism – honing in on Elder. Emphasizing that Elder had vowed to repeal mask and vaccine mandates “before I have my first cup of tea” if he were inaugurated as governor, Newsom characterized the election as a “matter of life and death”.

The day before the 14 September deadline to vote, Joe Biden campaigned alongside Newsom, telling voters “the eyes of the nation are on California”.

“It’s somewhat remarkable that Newsom was able to take the Covid issue, which might have been a failure fatal weakness for him and was able to turn it into a considerable strength,” said Dan Schnur, a politics professor who has advised Republican candidates.

For many voters, a “no” vote did turn out to be less an endorsement of Newsom and more a rejection of Elder and other Republicans. Newsom “didn’t let us turn into a Florida or a Texas”, said Tim Otto, a bookstore owner in Stockton, California – referring to states whose governors have blocked or fought mask and vaccine requirements.

Elder spent election night in Costa Mesa, California, where guests at his party viewed Fox News on big screens, and danced along to live music from Phil Crosby (Bing’s grandson) and his six-man band. He conceded defeat on Tuesday night.

Among early voters, Democrats outnumbered Republicans by two to one – though gap was expected to shrink on election day with a greater proportion of Republicans expected to cast their ballots day-of. Polls that had initially placed Elder within striking distance of Newsom began to widen ahead of election day. As his chances of victory slimmed, Elder began following in Trump’s footsteps by spreading conspiracy theories to falsely suggest that the election was rigged against him.

The results will have national reverberations. For Democrats across the country, Newsom’s victory has averted a crisis of confidence. “Democrats running in other parts of the country next year would do well to study Newsom’s playbook very carefully,” Schnur said – noting that the governor’s ability to find a foil in Elder is in large part what helped him energize voters.

The race has given Elder, an already popular fixture in rightwing media, a more prominent national stage. “I have now become a political force here in California,” he said in a recent radio interview, on KMJ Now radio. “I’m not going to leave the stage.” His election misinformation, which has been amplified by Trump and his allies, has carried on a sense of mistrust of US elections among conservative and rightwing voters.

The governor, who was elected by historic margins nearly three years ago, worked throughout the recall campaign to live down pandemic-era missteps. Parents were frustrated when public schools remained closed in California for far longer than they did in other states. Under Newsom, the state’s unemployment department struggled with major backlogs, and paid out an estimated $31bn in fraudulent claims. The governor also faced harsh criticisms over the state’s initially slow vaccine rollout and its ineffectual sign-up site. An ill-timed, lobbyist-laden dinner at the Michelin-starred French Laundry restaurant amid the state’s Covid-19 surge last November gave his opponents further ammunition against him.

Having survived the recall, Newsom will serve one more year before he is up for re-election. “If he had survived by a small margin, it is very likely another Democrat would have run against him from the left next year,” Schnur said. “But given a landslide like this one, it’s very hard to see that happening.”

A blowout for Newsom will also “further Newsom’s political strength and aspirations going forward”, said Mindy Romer, the founder of the Center for Inclusive Democracy, a nonpartisan research organization.

The only other gubernatorial recall that went to statewide vote was in 2003, when Republican Arnold Schwarzenegger ousted Democrat Gray Davis. But Newsom remained more popular than Davis did, despite his blunders.

Support for the recall was highest in parts of California’s agricultural central valley, and rural north. Those areas have always been more conservative, and were centers of resistance against mask requirements and pandemic restrictions over the past year.

Ultimately, a major consequence of this year’s recall in California could be a rethinking of the recall process itself. In a poll released Monday by the UC Berkeley’s Institute of Governmental Studies, co-sponsored by the Los Angeles Times, 75% of registered voters said they wanted to keep their right to remove a statewide official through a recall election. But a majority of voters also proposed reforms, such as increasing the number of petition signatures required to trigger a recall, and requiring that recallers give a reason for wanting to remove an official such as illegal or unethical conduct.