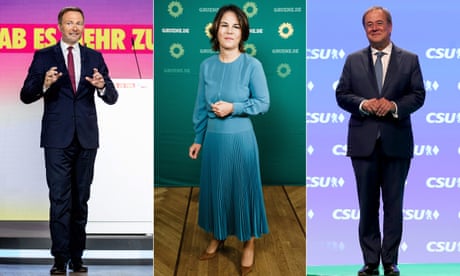 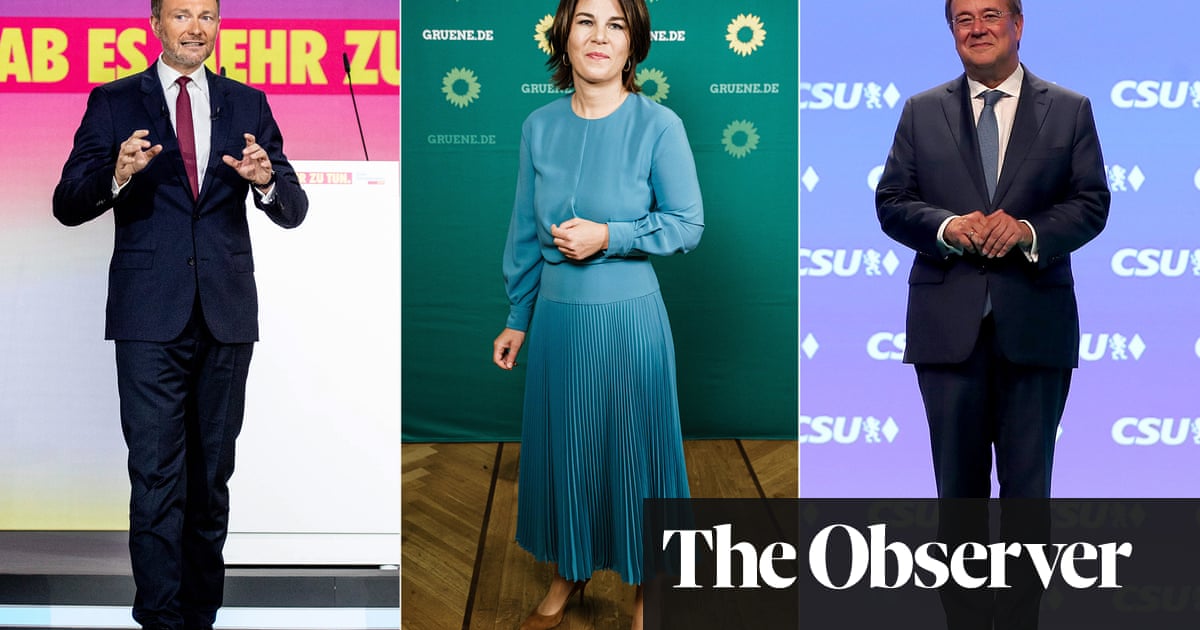 Germany is braced to enter a new “Dutch-style” political era after federal elections on Sunday, as a knife-edge vote points to months of complicated coalition wrangling.

Outgoing chancellor Angela Merkel joined the campaign trail at a rally in the western city of Aachen on Friday night in an attempt to help her designated successor from the Christian Democratic Union (CDU), Armin Laschet, close the gap on the centre-left Social Democratic party (SPD).

“We need a stable government,” Laschet told the crowd at the event in his home city. “If you want stability for Germany, the CDU-CSU [Christian Social Union] have to be in first place tomorrow.”

“We will turn this game around,” vowed the conservative Bavarian state premier, Markus Söder, at the event in the southern German state capital. Germany, he warned, must not become an “experimental site for leftwing tomfoolery”.

A lacklustre, at times unfocused campaign has seen the CDU trailing a resurgent SPD for the last month, though polling in the past few days has seen the gap between the two traditional broad-church parties tighten slightly. The last opinion survey to be published, by pollster Allensbach on Friday, showed the centre-left ahead by a whisker on 26% of the vote, followed by the centre-right on 25%. In others polls, the gap was also too narrow to be statistically significant.

Yet even if Sunday’soutcome were to reflect the predictions, the two Volksparteien – people’s parties – are mere shadows of the electoral forces they used to be in their heydays of the 1970s, when they shored up 90% of the national vote between them.

Instead, the vote is certain to yield a more even spread of parliamentary seats in the Bundestag than at any previous election in modern Germany, with the SPD or the CDU likely requiring the support of two more parties to build a governing majority. (A repeat of the grand coalition that has governed the country for the last eight years, even with hierarchies reversed, is seen as unlikely.)

While either the CDU’s Laschet or SPD candidate Olaf Scholz may receive standing ovations from their party faithful on Sunday, the strongest party on the night will not automatically get to field the next chancellor, and two second-tier parties are likely to rise on Monday with new kingmaker powers.

The pro-business Free Democratic party (FDP) used to be a traditional junior partner of the German conservatives, while the Green party has previously shared power with the Social Democrats. But in this year’s campaign they have already signalled their openness to adventures new.

“It is right that things would be easier for us with the [Christian Democratic] Union and the Greens than with the SPD and the Greens,” said the FDP leader, Christian Lindner, on Friday, expressing a preference for a “Jamaica” coalition – so called because the parties’ traditional colours mirror those of the Jamaican flag.

In a televised debate the night before, however, Lindner also hinted that he could see himself as the rightwing corrective in an otherwise left-leaning coalition: “The FDP will enter a coalition of the centre,” said the aspirant next finance minister. “There will be no green debts and red tax rises with us.”

The Green party’s lead candidate, Annalena Baerbock, has similarly expressed a preference for a pact with the SPD – without categorically ruling out joining a R2G (“red-green-red”) coalition that includes the far-left Die Linke, or one with the two centre-right parties: “A government without the Greens is like climate without protection,” she said on Thursday night.

“The political camps of old will have to move beyond their red lines,” noted an article in the Süddeutsche Zeitung newspaper. “Forming a government this time will be complicated, protracted and potentially explosive.”

The far-right Alternative für Deutschland (AfD), forecast to get 10%-11% of the vote, is the only party to have been ruled out as a coalition partner by all the other bigger parties.

With six parties expected to make up Germany’s parliament next term, the country is still a far cry from the Netherlands, where a record 17 parties entered the lower house after a national vote in March.

Still, Germany is likely to take its time to explore the unfamiliar dynamics of a changing political landscape. While the next Bundestag will have to convene for the first time by 26 October, there is no time limit on government formation, and no set rules on the order or format of coalition talks, which could theoretically take place in parallel. After the 2017 election, it took Merkel more than five months to form a government, a record in the history of the federal republic. That the German chancellor will still be in office in a caretaker role by Christmas seems more than likely.