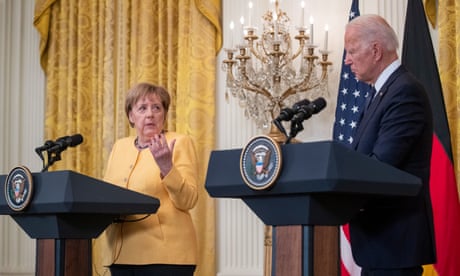 Devastating flooding in Germany has killed more than 80 people, with scores missing in one district alone, as chancellor Angela Merkel expressed deep sympathy for victims of a “catastrophe” whose extent will only be seen in the coming days.

On Friday morning, German media reported at least 81 people had died in the two worst-hit states, Rhineland-Palatinate and North Rhine-Westphalia, with 50 and at least 30 deaths respectively.

On Thursday night, authorities in the district of Ahrweiler said the death toll was expected to climb, and they were trying to trace about 1,300 missing people, though the high figure is due to damaged mobile phone networks.

Regional interior minister Roger Lewentz told broadcaster SWR: “We believe there are still 40, 50 or 60 people missing, and when you haven’t heard for people for such a long time … you have to fear the worst.”

“The number of victims will likely keep rising in the coming days,” he added.

In the town of Bad Neuenahr-Ahrweiler alone, more than 1,000 rescue missions were carried out on Thursday, with some ongoing.

More than 1,000 emergency services personnel were helping the district, drawn from across the state of Rhineland-Palatinate and the neighbouring states of North Rhine-Westphalia and Baden-Württemberg. It was too early to tell the scale of the damage, said Ahrweiler officials.

The dead in Rhineland-Palatinate include nine residents of an assisted living facility for people with disabilities and two firefighters involved in rescue efforts. In North Rhine-Westphalia, the town of Euskirchen was worst-hit, with at least 15 deaths reported.

The death toll in Belgium has risen to at least 11, according to Belgian reports.

Continuing rain is forecast for parts of the west, where water levels in the Rhine river and its tributaries are rising dangerously. Authorities in the Rhine-Sieg county in North Rhine-Westphalia ordered the evacuation of several villages below the Steinbach reservoir amid fears a dam could break.

Malu Dreyer, the governor of Rhineland-Palatinate state, told the regional parliament: “There are people dead, there are people missing, there are many who are still in danger … We have never seen such a disaster. It’s really devastating.”

Speaking at the White House during a trip to Washington, Merkel called it a day “characterised by fear, by despair, by suffering, and hundreds of thousands of people all of a sudden were faced with catastrophe”.

“My empathy and my heart goes out to all of those who in this catastrophe lost their loved ones, or who are still worrying about the fate of people still missing,” she said, noting many people in Luxembourg and the Netherlands were also suffering.

Merkel said her government would not leave those affected “alone with their suffering,” adding that it was doing its “utmost to help them in their distress”.

Standing at her side for a news conference after holding bilateral talks, US president Joe Biden called the flooding a tragedy.

“I want to express to you and to the people of Germany my sincere condolences and the condolences of the American people for the devastating loss of life and destruction due to the flooding over the past 24 hours in Germany and neighbouring countries,” Biden said.

Unusually heavy rains from a slow-moving low pressure system have inundated four countries, causing rivers to burst their banks and flooding streets in cities and towns, while power was knocked out for hundreds of thousands of households.

The storms have put climate change back at the centre of Germany’s election campaign ahead of a September 26 parliamentary poll marking the end of Merkel’s 16 years in power. Germany “must prepare much better” in future, interior minister Horst Seehofer said, adding that “this extreme weather is a consequence of climate change”.

In Germany, desperate residents sought refuge on the roofs of their homes as rescue helicopters circled above. In the town of Schuld in the Eifel mountains 70 people were reported missing after several houses collapsed overnight.

“It was catastrophic,” said 65-year-old Edgar Gillessen, whose family home was damaged. “All these people living here, I know them all. I feel so sorry for them, they’ve lost everything,” he told Reuters. “A friend had a workshop over there, nothing standing, the bakery, the butcher, it’s all gone. It’s scary. Unimaginable.”

The full extent of the damage across the region remains unclear after many villages were cut off by flood water and landslides that made roads impassable. Videos posted on social media showed cars floating down streets and houses partly collapsed.

EU Commission president Ursula von der Leyen pledged to help, and Pope Francis sent condolences, with his office saying the pontiff was praying for those injured and missing, as well as those who have lost their livelihoods.