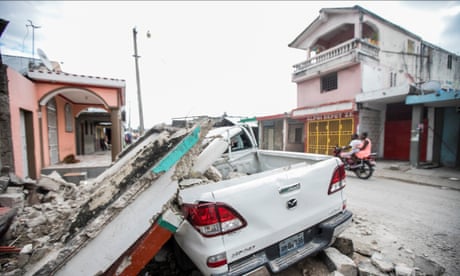 “Even here in Port-au-Prince you could feel it. It was strong,” said the 32-year-old journalist from the Magik 9 station, who abandoned her microphone and sprinted outside after the tremor.

Haiti’s seaside capital, which was shattered by a less powerful quake in January 2010, appears to have emerged largely unscathed from the latest in a terrible succession of natural disasters to blight the Caribbean nation.

But the situation on Haiti’s southern peninsula, over the earthquake’s epicentre, was far more dramatic, with towns such as Jérémie and Les Cayes pulverised by a calamity that authorities say has killed at least 1,297 people and wounded more than 5,700.

“I’m heartbroken. It is awful. It is my nightmare and the nightmare of anyone who remembers 2010, that something like this would happen again,” said Jonathan M Katz, an American journalist who survived that disaster and wrote a book about the botched international response.

On Sunday as rescue workers searched collapsed buildings for survivors, and aid workers raced to provide food, water and shelter to those forced from their crumpled homes, many of the region’s hospitals were swamped with seriously wounded patients.

“Right now I’m walking around the city to see if we can rescue more people and find more dead bodies,” said Claude Harry Milord, the mayor of Jérémie, where at least 100 fatalities have been confirmed.

Milord said some of the injured were being airlifted to Port-au-Prince. Those who remained were in desperate need of aid. “The city needs medicine, tents and food because many people have lost everything,” he said.

Across the peninsula in Les Cayes, the situation appeared to be even worse. “There are many people injured. The hospitals are overwhelmed. Some are treating people on the floor; some are just sending people back home,” said Akim Kikonda, an aid worker from the group Catholic Relief Services, adding that powerful aftershocks had left homeless survivors on edge. “People are really scared.”

Roody Bouilly, a telecoms worker in Les Cayes, said schools, hotels and supermarkets had been levelled. “What happened was really painful,” the 40-year-old said. “The city is really panicked. Last night lots of people slept on the streets, almost like we saw in Port-au-Prince on 12 January 2010.”

Complicating rescue efforts was the fact that the only road linking Haiti’s capital with the three worst-hit departments – Grand’Anse, Nippes and Sud – has become virtually unpassable in recent months because of a deadly struggle between police and heavily armed criminal gangs.

Milord, Jérémie’s mayor, said he feared that the arrival of tropical storm Grace, which is due to hit Haiti on Monday or Tuesday, would further complicate relief efforts. “I really don’t know what might happen,” he said, remembering how he had seen bodies strewn on the streets of his city after the quake struck at about 8.30am on Saturday.

Katz said the earthquake, which came just over a month after the assassination of Haiti’s president, Jovenel Moïse, had heaped further misery on south-west Haiti, a region still reeling from the devastation of 2016’s Hurricane Matthew.

Haiti might have faced another “epochal disaster” similar to the 2010 quake had the epicentre been closer to the capital, where about a third of Haiti’s 11 million citizens live.

“But if you live in Les Cayes, if you live in Jérémie, that is small comfort. A lot of people have already died and the death toll is going to continue to rise. This is going to be a really, really bad disaster on its own merit,” added Katz, the author of The Big Truck That Went By: How the World Came to Save Haiti and Left Behind a Disaster.

Gabriel, the radio presenter, said she was saddened to see that 11 years after the deadliest earthquake ever recorded in the western hemisphere, her country was still unprepared for such disasters. “We haven’t learned the lessons from 2010. It’s scary to realise,” she said, criticising the apparent lack of contingency plans and failure to improve building standards.

She fears months of uncertainty and hardship lie ahead as Haiti grapples with a series of profound and interwoven crises after the president’s still unsolved murder. “We have this political crisis, Covid-19 is still there, we have an economic crisis and we are now facing this earthquake and its aftermath. It’s really, really hard. It’s like you don’t have a break,” she said. “Instead of things getting better you feel like you are going into deeper trouble.”

Katz said images of shoddily built homes that had fallen “like houses of cards” underlined how the world had failed to make good on its post-earthquake pledges in 2010.

“The promise was always that the international community was not only going to help rescue people from the rubble. It was a larger promise that, as Bill Clinton famously said, they would help Haiti build back better.

“All you have to do is look at what has happened in the 24 hours since this earthquake hit to see that that never happened. Very little was built back, and that which was built back does not appear to be better.”