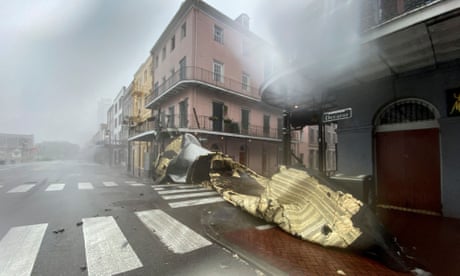 It’s 4am CDT and the National Hurricane Center has issued its latest advisory.

A Storm Surge Warning is in effect for:
Grand Isle, Louisiana, to the Alabama/Florida border

A Tropical Storm Warning is in effect for:
Grand Isle, Louisiana, to the Alabama/Florida border, including Lake Pontchartrain, Lake Maurepas, and Metropolitan New Orleans

Ida is moving north at 8 mph (13 km/h), according to NHC. Early this morning, the center of Ida is expected to move further inland over southeastern Louisiana, and then move into southwestern Mississippi.

This afternoon and tonight, Ida is forecast to move over central and northeastern Mississippi, and move across the Tennessee Valley on Tuesday.

Ida is expected to weaken further over the next day or so, and to become a tropical depression by this evening.

The National Weather Service has warned of flash flood emergencies in LaPlace, Luling and Destrehan, west of New Orleans. Residents are advised to move immediately to higher ground.

All American Airlines and United Airlines outbound flights from Jackson-Medgar Wiley Evers International Airport in Jackson, Mississippi, have been cancelled.

Fierce winds are being felt in McComb, and others areas of southwestern Mississippi. The National Weather Service has urged people not to go outside. “Power outages likely and wind damage possible,” it said on Twitter.

Disruption to power and mobile networks is making it harder to get up-to-date information.

The Emergency Communications Center for the City of New Orleans also said earlier that the 9-1-1 service is experiencing technical difficulties.

One person has died as Hurricane Ida, one of the most powerful storms ever to hit the US, knocked out power to all of New Orleans, reversed the flow of the Mississippi River and blew roofs off buildings across Louisiana.

The first death was reported in Prairieville, a suburb of Baton Rouge, after a tree fell on a house, said the sheriff of Ascension Parish.

Across Louisiana, more than a million households were without power, and the outage in New Orleans had left the city more vulnerable to flooding – 16 years after Hurricane Katrina caused devastation.

Hundreds of thousands of the city’s residents were without refrigeration in sweltering summer heat, and had been told to conserve water after sewage pumping stations – which have no back-up power – ground to a halt. Boil-water notices were issued in some areas.

The National Weather Service Storm Prediction Center has warned of a continued risk of tornadoes:

A loss of generator power at the Thibodaux Regional Health System hospital in Lafourche Parish, southwest of New Orleans, forced medical workers to manually assist respirator patients with breathing while they were moved to another floor, the state Health Department told Reuters.

Lady of the Sea General Hospital, also in Lafourche Parish, near where Ida made landfall, reported extensive roof damage

It was not possible to evacuate patients from hospitals in the worst hit areas, because health facilities elsewhere are already very busy. Louisiana is currently facing a rise in Covid infections, due partly to the spread of the Delta variant and low vaccine rates. An estimated 2,450 Covid-19 patients are hospitalized across the state.

Hurricane Ida was so strong it reversed the flow of the Mississippi River on Sunday – an extremely rare occurrence.

“I remember, off hand, that there was some flow reversal of the Mississippi River during Hurricane Katrina, but it is extremely uncommon,” Scott Perrien, a supervising hydrologist with the USGS Lower Mississippi Gulf Water Science Center in Baton Rouge, Louisiana, told CNN.

“We’ve never seen one like this, it’s the worst storm in our history,” Lafitte Mayor Tim Kerner Jr tells WGNO TV. A flash flood warning was issued for Lafitte earlier, after a levee was reported to be at risk of failing.

Footage taken by at locked-off camera at the eye of the hurricane at Port Fourchon, Louisiana.

Many residents in LePlace are sharing their names and addresses on social media, asking for urgent assistance. People are trapped in their attics and on their roof tops.

CBSN Dallas – Fort Worth was sent the following message from a woman who is begging for help for her stranded mother.

From Frenier Landing, on the west of Lake Pontchartrain, in LaPlace, where there is heavy flooding

More than one million customers in Louisiana are without power, according to poweroutage.us, which tracks outages.

The energy company Entergy earlier confirmed that power had been cut off across the entire of New Orleans, describing “catastrophic transmission damage”. In a statement, Entergy said power will not be restored this evening:

Ida has weakened to a category 1 hurricane on the Saffir-Simpson Hurricane Wind Scale, according to the US National Hurricane Center latest advisory.

Ida is now located about 30 miles (50 km) east-southeast of Baton Rouge, Louisiana, with maximum sustained winds of 95 miles per hour (155 km per hour), the NHC said.