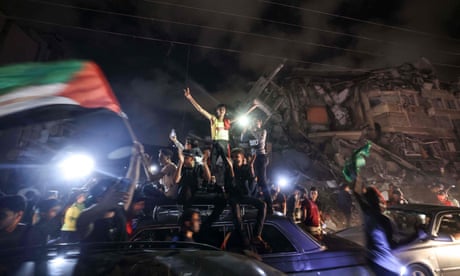 World leaders have hailed a ceasefire that took hold in the early hours of Friday morning, and vowed to help rebuild Gaza after an Israeli bombing campaign that killed more than 230 people and Palestinian rocket attacks that killed 12 in Israel.

The United Nations secretary general urged Israel and Gaza’s Hamas rulers to observe the ceasefire and called on global leaders to develop a reconstruction package “that supports the Palestinian people and strengthens their institutions”.

Antonio Guterres said after Thursday’s announcement of an end to 11 days of clashes that “Israeli and Palestinian leaders have a responsibility beyond the restoration of calm to start a serious dialogue to address the root causes of the conflict.”

Few analysts believe there will be progress towards resolving the fundamental issues in the immediate future. There were no signals of an end to Israel’s decades-old military grip over the Palestinian territories and its blockade on the already-devastated Gaza enclave, within which 2 million people live under hardline Hamas rule.

However, Guterres said the UN was ready to work with Israel, the Palestinians, and others to return to “meaningful negotiations” on a two-state settlement based on territorial lines before the 1967 war.

In a televised address from the White House, Joe Biden, vowed to continue what he called “our quiet and relentless diplomacy” towards a long-term settlement, adding: “I believe we have a genuine opportunity to make progress.”

In the short term, the international effort will be focused on ensuring the truce holds and beginning the task of humanitarian relief and reconstruction in Gaza.

In the countdown to the ceasefire at 2am local time on Friday, Palestinian rocket salvoes continued and Israel carried out at least one air strike. Each side said it stood ready to retaliate for any truce violations by the other. Cairo, which brokered the truce, announced it would send two delegations to monitor the ceasefire.

In the early hours of Friday, celebrations were held in the streets of Gaza to mark the truce after a bombardment which Palestinian health officials say killed 232 people, including 65 children. Israeli authorities put the country’s death toll to date at 12, including two children.

Cars packed Gaza’s main streets, with drivers honking their horns and waving flags from the windows.

Mosque loudspeakers hailed a “victory”, and men fired rifles into the air, while others set off noise bombs or firecrackers.

In Tel al-Hawa in Gaza City people said they were celebrating their safety, and what they viewed as their victory.

Fireworks were also set off in Sheikh Jarrah, the East Jerusalem neighbourhood where a long-running legal battle by Palestinian families to stop their forced eviction by Israeli settlers was a key factor in mobilising protesters across the Old City and further afield during Ramadan.

In his first substantial remarks on the crisis after 11 days of bloodshed, Biden sent his “sincere condolences to all the families – Israeli and Palestinian – who have lost loved ones and my hope for a full recovery for the wounded.”

The president has been criticised around the world and in his own party for refusing to agree to a joint UN security council call for a ceasefire, and his failure to directly criticise Israel for the heavy civilian casualties from its bombardment of Gaza, in response to Hamas rockets.

Biden commended Netanyahu “for the decision to bring the current hostilities to a close within less than 11 days”. He also hailed Israel’s air defence system, which the US helped develop, and which prevented hundreds of rockets from hitting Israeli towns and cities. Biden gave his “full support to replenish Israel’s Iron Dome system to ensure its defences and security in the future”.

The president expressed “sincere gratitude” to Egypt’s president, Abdel Fattah al-Sisi, for his mediating role, and said the US would work together with the UN agencies and the Palestinian authority, but not Hamas, to rebuild Gaza.

“I believe the Palestinians and Israelis equally deserve to live safely and securely, and enjoy equal measures of freedom, prosperity, and democracy. My administration will continue our quiet, relentless diplomacy towards that end,” Biden said, in a brief televised statement. He did not take questions.

In a tweet early on Friday, President Al-Sisi thanked Biden and said he shared the US president’s emphasis on diplomacy for managing the Israeli-Palestinian conflict.

British foreign secretary Dominic Raab said: “All sides must work to make the ceasefire durable and end the unacceptable cycle of violence and loss of civilian life”, adding that Britain supports “efforts to bring about peace”.

If it holds, the agreement will put an end to the heaviest fighting since 2014, in which Israeli airstrikes have inflicted widespread destruction in Gaza while militants have fired thousands of rockets into Israel.

When it was over, both sides claimed victory. One Hamas official, Ali Barakeh, told the AP that the truce was a defeat for Netanyahu and “a victory to the Palestinian people.” Israel’s military similarly claimed “great accomplishments”.

In recent days, Israeli media had suggested the military believed its goals had largely been met and Hamas officials said a ceasefire was in reach.

Senior Israeli defence officials recommended accepting the proposal after claiming “great accomplishments” in the operation, according to a statement from Netanyahu’s office.

Reuters and Agence France-Presse contributed to this report