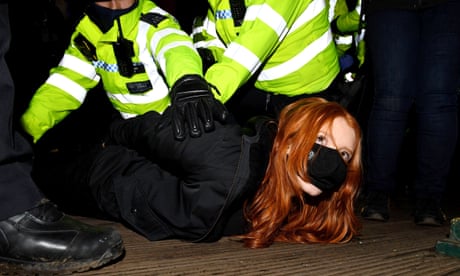 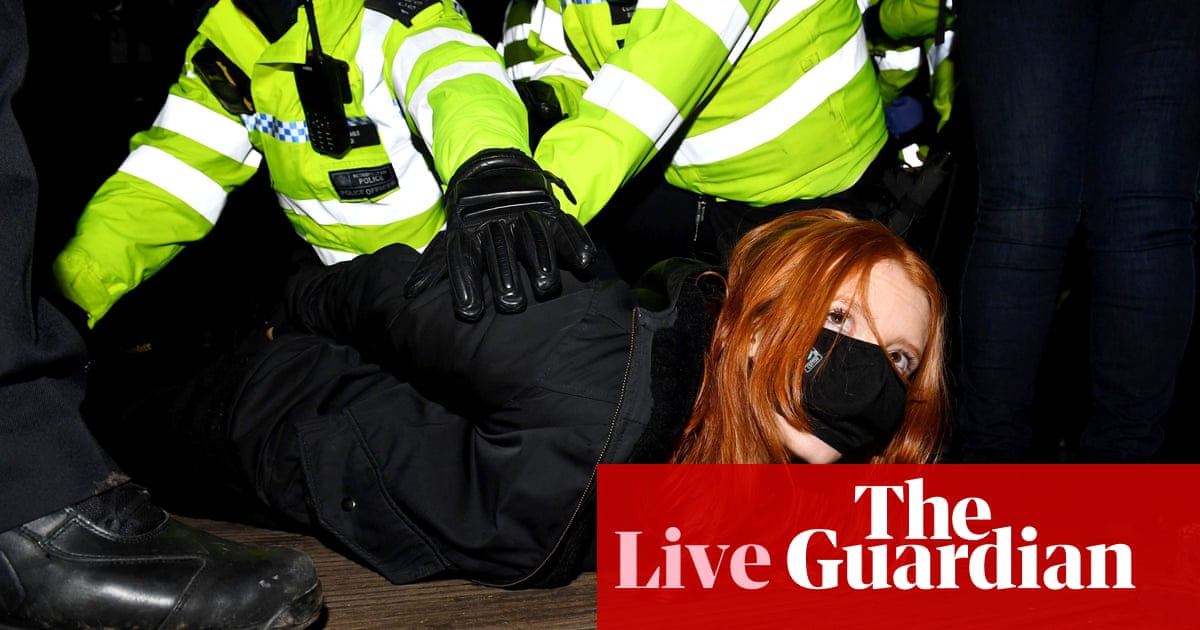 The victims’ commissioner Dame Vera Baird QC said there was no real prospect of police successfully intervening in the crowd in Clapham on Saturday night, describing the circling of the bandstand as “quasi military” and a “dreadful misjudgement”.

To push people away seems to me to be a dreadful piece of misjudgment.

Are they really improving the chances of Covid not spreading by putting their knees in the middle of the back of young women, and putting their hands in handcuffs?

It didn’t seem to me to be the right thing to do.

There needs to be some significant government leadership, and there needs to be a significant drive to change the culture, to acknowledge that we are in real danger of losing confidence in the criminal justice system from half of the population of this country.

Despite most official vigils for Sarah Everard being cancelled, people brought floral tributes and left messages of solidarity at locations around the country yesterday. Take a look here.

Asked by Marr about individual police officers and forces having had to make decisions under Covid regulations, Jess Phillips said:

Within the legislation that has been nodded through, there was room for yesterday, a peaceful vigil to take place and they missed the opportunity for that to happen.

Phillips highlighted that this was able to happen at other vigils outside of London.

Asked whether Cressida Dick, the Met police commissioner, should resign, the shadow domestic violence minister Jess Phillips told Marr she was there to talk about violence against women and girls, and Sarah Everard.

This is not the day for me to say whether she should go and give a headline on Cressida Dick when Sarah Everard is the name that should ring out.

“The police have got it wrong at every single turn,” she said.

Not just the final image that we see, but all day yesterday and the day before, the police did not try and find a way for a peaceful protest – not a protest, actually – a vigil, a moment.

The did not try to find a way to work with women who are sad and angry and upset to be able to, not even gather but just go to Clapham Common.

There are a million ways that that could have been organised but the police put their foot down before they put their boot in and at every stage they made the wrong call.

On the Sarah Everard case, Jess Phillips said it has cut through because it speaks to every woman’s experience of being afraid, adding that even the future queen of the country [the Duchess of Cambridge] can relate to it.

Kate was seen at the bandstand in Clapham Common paying her respects yesterday afternoon.

Jess Phillips, Labour’s shadow domestic violence minister, told Ridge on Sunday there were so many missed opportunities yesterday for the police to work with organisers to hold a safe vigil for people to express their sorrow and resistance.

The images from last night will only “undermine” their effort to get women to come forward, she added.

Asked whether the Met police commissioner Cressida Dick should go, Phillips said she wished the “heavy hand of the law” had been there for the many women harassed and sexually assaulted, including a woman who recently brought forward a rape accusation in her constituency – that was eventually thrown out.

The reality is if Cressida Dick stays or goes, it doesn’t make women in this country more safe.

From the Mirror’s Pippa Crerar

Here is our overnight story detailing how, amid cross-party anger, the Metropolitan police defended its policing of the Clapham vigil as “necessary”. Officers were put in a position where they had to take “enforcement action”, said assistant commissioner Helen Ball.

The home office minister Victoria Atkins, whose brief is crime and safeguarding, is speaking to Sophy Ridge on Sunday on Sky News now.

Atkins said the majority of people who attended the vigil in Clapham Common had a peaceful experience. However, the scenes last night were “very upsetting”, she said, and the home secretary “takes it very seriously”, which is why she has asked the Met for a “full report” of what happened.

Asked about images of a woman held to the ground by police, Atkins said that would form part of the report from the Met to the Home Office.

Ridge also asked her about the comparison between the large group of (mostly) men who were allowed to gather in Glasgow after the Rangers won, and police arresting women at the peaceful vigil last night. Atkins referred once again to the report the Home Office has demanded.

Though event policing is “challenging at the best of times”, she added, the police should be held to account by democratic means.

Atkins declined to answer whether she thinks the police service is sexist, but said a survey into violence against women and girls has be reopened and had more than 15,000 responses.

Asked whether the Met police commissioner, Cressida Dick, should resign, Atkins said she should be given a chance to respond and referred once again to the report.

I really, really want to support the home secretary in her request to have a report from Cressida. The police have got a tough job in policing the coronavirus pandemic at the moment.

Referring to last night, Atkins said this “is not what any of us wanted”.

Good morning. Police at a vigil in memory of Sarah Everard were “placed in a position where enforcement was necessary”, Scotland Yard said amid pressure to explain its handling of the gathering and with Met police commissioner Cressida Dick facing calls to resign.

Priti Patel, the home secretary, and Sadiq Khan, the London mayor, both said they had demanded an explanation from the Met, amid accusations that officers had grabbed women during tussles with the crowd and mismanaged the largely peaceful vigil in Clapham Common, south London.

In the early hours of Sunday morning, Scotland Yard confirmed that four people were arrested for public order offences and breaching coronavirus restrictions at the vigil.

There was outcry across the political spectrum at the way the Met policed the event. Patel described footage circulating online of the police’s actions as “upsetting” and confirmed she has demanded a full report on what happened. Khan added that he was in contact with Dick and “urgently seeking an explanation”.

The Labour leader, Sir Keir Starmer, said the scenes were “deeply disturbing”, adding: “This was not the way to police this protest.” The Liberal Democrats leader, Sir Ed Davey, went further, writing a strongly worded letter to Dick. In it, he said: “This was a complete abject tactical and moral failure on the part of the police.” He added Dick should “consider her leadership”.

The gathering on Clapham Common, near where Everard was last seen, had been largely peaceful, but the atmosphere turned when police surrounded the bandstand, covered in floral tributes to the 33-year-old.

As several women were escorted away by police, the crowd chanted “shame on you” – and during one confrontation, a distressed woman told officers: “You’re supposed to protect us.”

Assistant commissioner Helen Ball defended the police’s actions in a statement. She said:

At this point, officers on the ground were faced with a very difficult decision. Hundreds of people were packed tightly together, posing a very real risk of easily transmitting Covid-19.

Those who gathered were spoken to by officers on a number of occasions and over an extended period of time. We repeatedly encouraged those who were there to comply with the law and leave. Regrettably, a small minority of people began chanting at officers, pushing and throwing items.

Ball said Scotland Yard accepts that the actions of their officers have been questioned, but added:

We absolutely did not want to be in a position where enforcement action was necessary. But we were placed in this position because of the overriding need to protect people’s safety.

Let me end by saying that across the Met we review every single event that we police to see if there are lessons that can be learnt. This one will be no different.