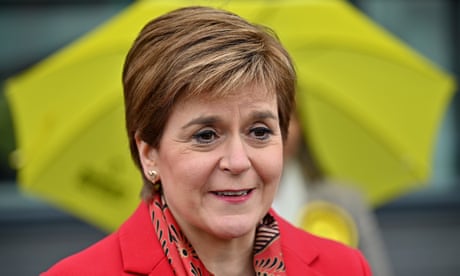 Nicola Sturgeon has pledged to press ahead with plans for a second independence referendum after the Scottish National party won its fourth consecutive Holyrood election, triggering a constitutional battle with Boris Johnson.

In a letter issued before the final results were declared, Johnson attempted to blunt Sturgeon’s attack by urging the first minister and her opposite numbers in Wales and Northern Ireland to join a UK-wide Covid recovery summit involving all four governments.

It was in the UK’s interests for the governments to work collaboratively, the British prime minister wrote, taking a softer approach than on Friday when called a fresh referendum “irresponsible and reckless”.

After counting ended late on Saturday evening, the SNP won 64 seats, missing out on an overall majority by just one seat, after winning a record number of constituencies despite a surge in anti-independence tactical voting.

Sturgeon said Scottish voters had given Holyrood a clear mandate by electing a pro-independence majority larger than that in the last Holyrood parliament, with eight Green MSPs elected across Scotland’s regions. It was an “extraordinary” result, she said.

In a victory speech in Glasgow, the first minister said any attempt by the UK government to block that would be a democratic outrage. “It is the will of the country,” she said, buoyed up by a record 64% turnout for a Holyrood election.

“Given the outcome of this election, there is simply no democratic justification whatsoever for Boris Johnson or anyone else seeking to block the right of the people of Scotland to choose our future,” Sturgeon said.

“If the Tories make such as an attempt it will demonstrate conclusively that the UK is not a partnership of equals and that – astonishingly – Westminster no longer sees the UK as a voluntary union of nations. That in itself would be a most powerful argument for Scotland becoming an independent country.”

The final tally left the parties close to their standing after the 2016 election, with the SNP on 64, the Tories in second on 31, Labour on 22, the Greens on eight and the Liberal Democrats on four.

Johnson told Sturgeon in his letter: “I believe passionately that the interests of people across the UK and in particular the people of Scotland are best served when we work together. We have shown that through the vaccine roll-out.”

The vaccine procurement programme was “Team UK in action, and I recommit the UK government to working with the Scottish government in this cooperative spirit,” the prime minister added.

The Scottish and Welsh governments are likely to see this as nakedly cynical. Sturgeon and her Welsh counterpart Mark Drakeford, who also won a fresh mandate in the Welsh elections, repeatedly asked Johnson and his predecessor Theresa May to work collaboratively on the UK’s post-Brexit deal with the EU, and other UK-wide economic policies.

His letter, in which he said collaborative working was “in the interests of the people we serve”, struck a markedly different tone to his combative interview with the Telegraph on Friday night when he said he thought “a referendum in the current context is irresponsible and reckless.”

Sturgeon signalled the Scottish government was ready for a constitutional battle with Johnson, telling Channel 4 News on Friday evening her government would legislate for the vote “and if Boris Johnson wants to stop that he would have to go to court”.

That would force the UK government into the politically hazardous territory of asking the UK supreme court to quash that legislation, risking an increase in popular support for independence in Scotland and a constitutional battle over Holyrood’s limited legal powers.

“If this was in almost any other democracy in the world it would be an absurd discussion,” she added. “If people in Scotland vote for a pro-independence majority in the Scottish parliament, no politician has got the right to stand in the way of that.”

Sturgeon’s lingering hopes of winning a majority were quashed after the Scottish Conservatives won a key SNP target seat of Aberdeenshire West with a hefty majority – a result the Tories will argue vindicates their decision to make independence one of the biggest issues in their campaign.

Sturgeon’s ability to control the timing and strategy on a referendum was secured after Alex Salmond’s attempt to win seats for his new hardline pro-independence Alba party failed; he was humiliated after Alba secured about 2% of the vote, with SNP voters failing to swing behind his demands for an immediate referendum campaign.

After early indications from the regional list vote suggested Alba would fail to win seats, Salmond made a YouTube broadcast directed at his supporters. Looking tired, he complained Alba was “shut out” of the televised leaders’ debates and hit out at “weirdos and cranks” of the mainstream media.

Describing the SNP leadership as “among the most graceless I have ever come across”, he claimed that “Nicola lost her nerve on independence back in 2017 and has never recovered it”, adding that Alba was still needed in order the “fill a vacuum” created by Sturgeon’s “prevarication”.

Duncan-Glancy told reporters: “I promise to do everything in my power to make sure that the path for the next disabled and permanent wheelchair-using MSP is nowhere near as hard as it has been for the first.”

She congratulated Stewart, describing it as a “fantastic result”. “It really had been an incredibly special day for equalities.”

The final result, which gave the SNP the highest share of the vote since the Scottish parliament was set up in 1999, followed some widely varying results in the constituency counts on Friday and Saturday.

On Friday, after a series of strong results for pro-UK candidates suggested the SNP vote was lower than expected, Sturgeon said she had always believed an SNP overall majority was a “very, very long shot.” Labour and the Tories believed an upsurge in anti-independence tactical voting in marginal seats, and Lib Dem-, Tory- and Labour-held seats, would restrain the SNP.

But the mood changed dramatically on Saturday after list votes showed higher levels of support for the SNP than expected. That led the Tories to predict the SNP could just snatch an overall majority. Douglas Ross, the Scottish Tory leader, said the outcome was “very much on a knife edge … Clearly it’s extremely close.” Conservative officials said Sturgeon’s plea to SNP voters to back the party on both votes “seems to have worked.”

Angus Robertson, the former SNP Westminster leader who comfortably won Edinburgh Central, the seat famously taken off the SNP by Ruth Davidson, the then Scottish Tory leader in 2016, said there was a clear mandate for a second referendum.

Robertson, a combative and very experienced election strategist tipped as a future SNP leader, said: “If a majority is elected to the Scottish parliament in favour of an independence referendum, then that’s exactly what should happen,” he said.

Dealing with the social and economic impacts of the Covid crisis would be the immediate priority, he added. “The decision needs to be taken at the right time, in the right circumstances, about when it’s right to hold a referendum,” he said.

His caution reflects a series of opinion polls which have shown a 10-point fall in support for independence in recent months, compared with a peak in the yes vote of 58% late last year. The fall in the yes vote implies that consistent warnings from pro-UK parties that the Covid recovery needs to come first have cut through, even if that has not translated into greater support for Labour or the Tories.