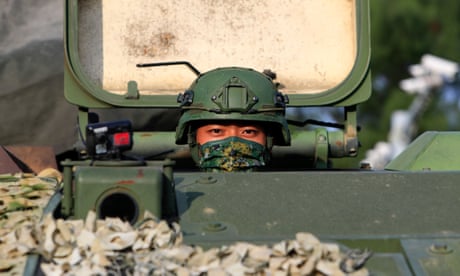 Taiwan has welcomed support from major allies after a US-Australia ministerial forum pledged stronger ties with the island and the European parliament called for a bilateral trade deal.

A spokesperson for the foreign ministry also cautiously noted the British prime minister’s refusal to rule out getting involved in a war with China over the island, but said Taiwan was not asking anyone to fight on its behalf.

The statements come amid rising international concern over China’s aggression in the Indo-Pacific region and one day after the US, UK and Australia announced the Aukus pact, a significant new security partnership, widely viewed as a move designed to counter Beijing.

On Friday, senior government ministers at the annual US and Australian ministerial consultation (Ausmin) stated mutual intent to “strengthen ties with Taiwan”, which they described as a “leading democracy and a critical partner for both countries”.

“The United States and Australia reiterated continued support for a peaceful resolution of cross-Strait issues without resorting to threats or coercion,” the joint Ausmin statement said.

In response Taiwan’s ministry of foreign affairs “sincerely thanked” the US and Australia for their “firm and open” support.

“Building on the solid existing foundations, our government will continue to work closely with the United States, Australia and other countries with similar ideas to expand Taiwan’s international space, safeguard democracy and shared values, and a rules-based international order, and jointly safeguard peace, stability and prosperity in the Indo-Pacific region,” said ministry spokesperson Joanne Ou.

Taiwan is considered at risk of attack or invasion by China, which claims it as a province, although the potential nature and timing is debated. Unification is a key goal of Chinese leader, Xi Jinping, who has not ruled out taking Taiwan by force. Beijing regards Taiwan’s democratically elected government as separatists but Taiwan’s president, Tsai Ing-wen, has said Taiwan is already a sovereign country with not need to declare independence.

The Ausmin statement by government representatives was also highly critical of China over its actions in the South China Sea and human rights abuses. In response China’s embassy in Canberra said it would “firmly oppose and reject the unfounded accusations and erroneous remarks”.

“This petty move to put pressure on China will be of no avail but a staged farce.”

As China’s aggression in the region has grown and Taipei has courted alliances, western nations have pushed for greater inclusion of Taiwan on the diplomatic world stage and demonstrated increasing support for defending it against China.

None of the Aukus nations recognise Taiwan as a country. They instead have formal ties only with the government of the People’s Republic of China, which claims Taiwan as a Chinese province under its “One China Principle”.

Various other nations have their own “One China” policies, which lay out the level of recognition their governments afford Beijing’s policy. The US and Australia, for example, acknowledge but do not recognise Beijing’s claim over Taiwan.

Following Thursday’s Aukus announcement, former British prime minister Theresa May asked Johnson: “What are the implications of this pact for the stance that would be taken by the United Kingdom in its response should China attempt to invade Taiwan?”

Taiwan’s ministry of foreign affairs would not comment on if or how it saw the UK being involved in the eventuation of conflict. Foreign minister Joseph Wu has previously told the Guardian he saw countries like Australia and Japan likely offering logistical or intelligence support, rather than military.

On Friday, Ou said Taiwan welcomed the formation of Aukus “but it doesn’t imply that we are asking the UK to get involved in the conflict across the Taiwan Strait”.

“We are responsible for Taiwan’s national security, we are not asking the UK or any other country to fight on our behalf,” Ou said.

“Of course we would appreciate very much the support of the international community and like-minded countries, but that is not an imperative.”

Also on Thursday, the European parliament passed a resolution which included recommendations for the European Union to “urgently” negotiate a trade agreement with Taiwan. Earlier this year a years-long negotiated trade deal between the EU and China was essentially frozen after tit-for-tat sanctions arising from EU concern over China’s human rights abuses, including in Xinjiang.

This week China submitted an application to join the Comprehensive and Progressive Agreement for Trans-Pacific Partnership, a key Asia-Pacific trade pact signed by 11 countries in 2018.

“Whilst China is an important trading partner, it is also a systemic rival that poses a challenge to our way of life and the liberal world order,” said Hilde Vautmans, a member of the European parliament’s committee on foreign affairs, in the statement.

Margaret Lewis of Seton Hall Law School in New Jersey, said the EU resolution was significant given the recent spat between China and Lithuania over the latter’s support for Taiwan, and to emphasise Taiwan’s importance to the global market.

“I’m heartened to see vocal support from the EU in part because as Beijing tries to bully Lithuania, it’s important to show that’s not going to work,” she said.

“The EU didn’t need to make this statement – it was a decision to make a statement they know would not be viewed favourably by Beijing.”