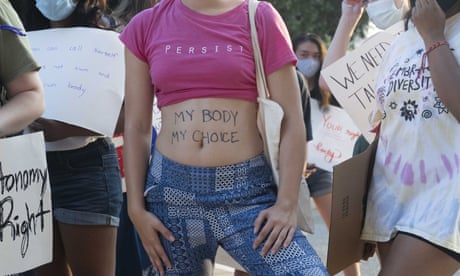 A deeply divided supreme court has allowed a Texas law that bans most abortions to remain in force, stripping most women of the right to an abortion in the nation’s second-largest state.

The court voted 5-4 early on Thursday to deny an emergency appeal from abortion providers and others that sought to block enforcement of the law that went into effect Wednesday.

The Texas law, signed by Republican governor Greg Abbott in May, prohibits abortions once medical professionals can detect cardiac activity, usually around six weeks and before most women know they’re pregnant.

It is the strictest law against abortion rights in the United States since the high court’s landmark Roe v. Wade decision in 1973 and part of a broader push by Republicans across the country to impose new restrictions on abortion. At least 12 other states have enacted bans early in pregnancy, but all have been blocked from going into effect.

“In reaching this conclusion, we stress that we do not purport to resolve definitively any jurisdictional or substantive claim in the applicants’ lawsuit. In particular, this order is not based on any conclusion about the constitutionality of Texas’s law, and in no way limits other procedurally proper challenges to the Texas law, including in Texas state courts,” the court said in the unsigned order.

Texas has long had some of the nation’s toughest abortion restrictions, including a sweeping law passed in 2013. The Supreme Court eventually struck down that law, but not before more than half of the state’s 40-plus clinics closed.

Even before the Texas case arrived at the high court the justices had planned to tackle the issue of abortion rights in a major case after the court begins hearing arguments again in the fall. That case involves the state of Mississippi, which is asking to be allowed to enforce an abortion ban after 15 weeks of pregnancy.

While a dozen other states have passed similar so-called “heartbeat” bills, they have all been blocked by the courts. The Texas version is novel in that it is intentionally designed to shield government officials from enforcement, and thus make legal challenges more difficult to secure. It instead incentivizes any private citizen in the US to bring civil suit against an abortion provider or anyone who “aids or abets” the procedure.

The law “immediately and catastrophically reduces abortion access in Texas”, say state abortion providers, and will probably force many abortion clinics to ultimately close. It will prevent the majority of Texas women (85%) from accessing abortion care, as most aren’t aware they are pregnant as early as six weeks.

“Abortion access will be thrown into absolute chaos,” says Amanda Williams, executive director of the abortion support group the Lilith Fund, a plaintiff in the suit that challenged the law. “Unfortunately, many people who need access the most will slip through the cracks, as we have seen over the years with the relentless attacks here in our state.

“It is unbelievable that Texas politicians have gotten away with this devastating and cruel law that will harm so many.”

Joe Biden condemned the new law on Wednesday and reaffirmed the White House’s support for abortion rights. “This extreme Texas law blatantly violates the constitutional right established under Roe v Wade and upheld as a precedent for nearly half a century,” Biden said in the statement.

Planned Parenthood, which operates 11 clinics in the state, and Whole Woman’s Health clinics told the Guardian they would comply with the extreme law despite the fact that it is contrary to their best medical practices. In the days leading up to the law’s enactment, Texas clinics say they have been forced to turn away patients who need abortion care at the law’s cutoff point this week and into the near future.

Some abortion physicians in Texas have opted to discontinue offering services, choosing to forgo the potential risk of frivolous and costly lawsuits.

“We are all going to comply with the law even though it is unethical, inhumane, and unjust,” Dr Ghazaleh Moayedi, a Texas abortion provider and OB-GYN, said. “It threatens my livelihood and I fully expect to be sued. But my biggest fear is making sure the most vulnerable in my community, the Black and Latinx patients I see, who are already most at risk from logistical and financial barriers, get the care they need.”