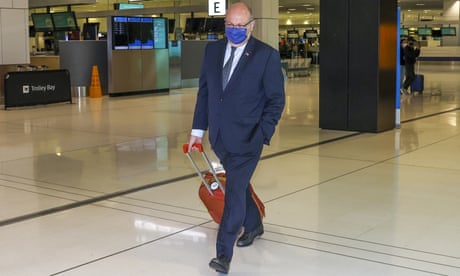 The French ambassador to Australia was in a car heading to Sydney airport for an urgent flight back home when he revealed he was “sad like any decent person would be”.

“I’ve seen and learned how deep for an Australian it is when you commit to watch each other’s back. What makes me sad is that we thought we were mates and we were stabbed in the back,” Thebault told Guardian Australia on the way from Canberra to Sydney airport.

The experienced diplomat was recalled to Paris, along with his counterpart in Washington, as the French government weighs up how to respond to what Biden administration officials called “the biggest strategic step that Australia has taken in generations”.

That big step involved the US and the UK agreeing to share sensitive technology and help Australia build at least eight nuclear-powered submarines, a capability the allies say is needed to respond to growing concerns about China’s military assertiveness. The collateral damage from the deal – hatched among the Aukus allies in secret – was Australia’s existing plans with France’s Naval Group for 12 diesel-electric submarines.

Thebault maintains France was not given any forewarning.

There were Australian press reports earlier this year that the government was conducting a review that could result in the contract being terminated, amid concerns about cost increases and schedule slippages. In June, Australian defence officials told a Senate committee they were doing “prudent” contingency planning.

But Thebault says “at no point, in no way” was France given “any clear signal that the contract would be brought to an end”. France thought those contractual issues were being resolved and conversations would continue.

“I can only say that the sense of treason is very strong,” Thebault, who started his posting in Australia 10 months ago, said from the car.

“And I use those words because of what has now transpired from apparently reliable sources, which have not received any official denial, that it was in process for 18 months. It was intentionally decided to keep France completely in the dark at the same time that several officials of Australia were not only discussing with France the current [submarine] program but were also saying they were willing to make this program a success and a symbol of the bilateral relationship.”

Asked whether “treason” – meaning betraying one’s own country – was taking it too far, the ambassador said he didn’t mean it literally. He said the “sense of treason” was strong “because of lack of respect, and because of lack of transparency, because we were committed to a partnership”.

“We are not speaking about normal contracts; we are speaking about a strategic partnership where France was sharing state military secrets with Australia and was committed to creating a sovereign industry in Australia according to the standards set by Australia,” Thebault said.

“It’s like in a couple, you know, when you commit. After that, you have duties and opportunities … the duty is decency, the duty is transparency. If, for one reason or another, you feel that you have to change your mind, you say it – you don’t run away.”

A defence source said the Australians first went to the UK’s Royal Navy to discuss Canberra’s desire to abandon the French contract and build nuclear-powered submarines with the UK and US instead. Having secured British support, the Australians then went to the Biden administration.

It was left to the Australians to break the news to the French, but there seemed to be divisions in Canberra about the best way of going about it.

“Some Australians wanted to ring up one week and say we’re so sorry, we’re putting out the diesel submarine contract, and ring up the next week, and say we just want you to know that we found a better submarine and it’s British,” the defence source said. “There was another school of thought that said: don’t do it like that. They’ll see through it and it will be worse because it will look duplicitous.”

In the end, neither side won. The French were not told before details began to leak to the Australian and US media on Wednesday.

The French president, Emmanuel Macron, welcomed the Australian prime minister, Scott Morrison, to Paris in June, with Macron declaring the French-delivered submarines would “reinforce the position of Australia and contribute to Australia’s sovereignty and strategic autonomy”.

This was just days after Morrison joined the British prime minister, Boris Johnson, and the US president, Joe Biden, for a trilateral meeting on the sidelines of the G7 summit in Cornwall. It is now believed the three leaders discussed defence cooperation plans at that meeting leading to the eventual announcement of the so-called Aukus pact.

Morrison told reporters on Thursday he had been “very clear” in the talks with Macron about “the strategic situation in the Indo-Pacific” and that there were “very real issues about whether a conventional submarine capability would be able to address those going forward”.

Thebault – who was in Paris during that visit – offers this version: “The prime minister, to our understanding, signalled that there were questions raised about the evolving situation in the region … but what was agreed is that this conversation would continue.”

Just two weeks before the Aukus announcement, Australian ministers Marise Payne and Peter Dutton met by video link with their French counterparts to herald ever-strengthening ties. According to the official joint statement, the four ministers “underlined the importance of the future submarine program”.

Thebault – an experienced foreign affairs official who has served as ambassador to Ireland and who oversaw France’s preparations to host the G7 in 2018-19 – says the late August talks were “very positive and friendly” but it was now apparent there was “no sincerity in the discussion”.

The timing is also a source of tension: France had been encouraging the European Union to adopt a “very, very active” Indo-Pacific policy. The EU’s announcement of its forward-leaning regional strategy coincided, Thebault says, with Australia revealing its decision “to renege on its word, commitment and signature”.

“This can only have deep, deep impact, a long-term impact, not only on the bilateral relationship but also on the relations between Australia and European countries, and also, perhaps, more globally, because such an attitude and a way of treating a friend and ally is not something that will pass unnoticed.”

The Australian government says it “notes with regret” France’s decision to recall its ambassador.

Dutton on Sunday told Sky News he understood “that the French are upset at the cancellation of the contract”.

“But in the end, our job is to act in our national interest, and suggestions that the concerns hadn’t been flagged by the Australian government defy, frankly, what’s on the public record and certainly what was said publicly over a long period of time.”

The defence minister insisted Australia wanted to work “very closely with the French … into the future”. The prime minister on Sunday said the French were formally advised about 10 hours before Thursday morning’s press conference in Australia.

Some Australian politicians believe France may have overreacted to the decision in part because of upcoming presidential elections, with Macron facing a first-round vote in April. “The French are about to go through an election season,” said Jason Falinski, a Sydney-based Liberal MP, who argues recalling the ambassadors “is what the French government needed to do in terms of sending a signal to their people” about standing up for French interests.

Thebault is diplomatic when asked about that viewpoint. “I won’t comment on Australian politicians commenting on French elections,” he said, but also hinted at possible political considerations in Australia, too. Morrison is due to call a federal election by May.

“I have also seen many reports in the press – and I don’t want to express any opinion about that – that maybe certain decisions in Australia are sometimes also taken with considering potential elections.”

Thebault is coy about what needs to be done to repair the relationship between Canberra and Paris amid suggestions from French ministers that EU trade talks with Australia may be affected.

“What will be the extent and the depth of the damages – this assessment is the reason for which I am recalled for consultation of France, where I’ll be able to discuss with relevant ministers and the authorities in order to get their advice, to give my feedback and to try to assess what can be done,” the ambassador said.

“I just want to say that whatever decision will be taken, this in no way diminishes the very high esteem and appreciation that France has for Australia as a country – and for the Australians as friends, partners and allies.”